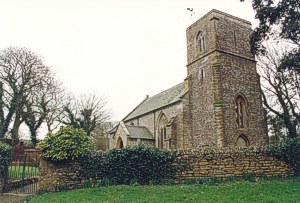 Holy TrinityThe first rector recorded here was in 1297, so this is an ancient place.  The tower and chancel are 1406.  The interior is intriguing with its high plaster rib-vaulting above the nave and a barrel roof over the chancel.  The 7th Duke of Bedford rebuilt the nave in 1843.  The pulpit is worthy of note with its painted panels and beautiful modern crucifix behind.John Hutchins, the celebrated Dorset historian, was rector here in 1729 when he repaired the chancel at his own expense.  He was later rector of Lady St. Mary in WarehamNote the brasses on either side of the doorway in memory of members of the Russell family from whom the Dukes of Bedford are descended.  In 1506, John Russell, who spoke fluent Spanish, was asked to go to Wolfeton House (near Dorchester) to translate for the Archduke of Austria and his Spanish princess bride.  In due course he travelled to Court with them, so starting the family's rise to favour.The Trust gratefully acknowledges images and text by Robin Adeney ©