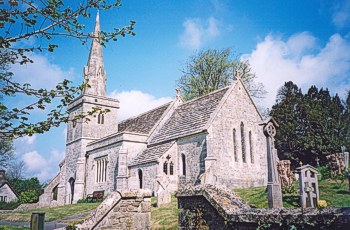 A Church has stood on this site since the 13c, but today's visitor mostly sees the reconstruction of about 1850, carried out by the third Robert Williams of Bridehead (1811-1890), to the designs of Benjamin Ferry, with additional architectural contributions from Williams' brother-in-law, Arthur Acland.  The only visible relics of the older church are the tower and porch beneath it, and some of the features in the chancel, such as the vestry doorway, the piscina beside it in the south wall, and some of the windows, though the nave and south aisle also pre-date the Victorian transformation.

Robert Williams was a keen Tractarian in his youth, but a close friendship with John Henry Newman at Oxford did not survive the latter's conversion to Roman Catholicism in 1845: indeed Williams seems to have reacted violently in the opposite direction - he apparently destroyed all correspondence from Newman, to the loss of his subsequent archivists - and his works here certainly demonstrate a strong "Low Church" influence.  Hence, in particular, there is no screen between nave and chancel, and no extravagance in church furniture, where wood is preferred to brass throughout.

All the same, great care was taken to ensure quality in the 1850's restoration, when the nave was lengthened, the north aisle was added, and, most significantly in visual terms, the church was embellished with one of Dorset's few steeples.  The stone for the rebuilding came from Caen in Normandy, the estate Bailiff having been sent there to buy it direct from the quarries.  Care that only the best materials should be used extended to a written offer by Williams to Acland at one stage to take up the newly-laid library floor at Bridehead and use the oak in the Church, rather than settle for inferior timber if that were otherwise the best available.  (This contingency did not in fact arise.)  The stones of the new spire were fastened with dowels made of flint, rather than metal.  It is not known whether this was the fruit of architectural theory or an attempt to emulate the building of Solomon's Temple (see 1 Kings, chapter 6, verse 7).  Whatever the reason, it proved a costly foible retrospectively, when the spire had to be repaired in 1963.

There are six bells in the tower, of which two are Mediaeval, one is Victorian, one was cast in 2002 from the material of three discarded 1850 bells, and two, dating from 1933, came here second-hand from Cornwall during the major restoration of the bells in 2002.  They are inaccessible to the visitor, but a longer description is to be found on a notice board beside the tiny belfry just west of the porch, which houses the chiming mechanism.

Apart from the Bridge family, who died out here in the early 1800's, most of the internal memorials recall the Williamses of Bridehead.  The most notable is that of Jane (1739-1841), the daughter of one Francis Chassereau, who came, aged 14, to this country from Niort, in France, after the Revocation of the Edict of Nantes.  Those whose history is shaky may like to be reminded that the Edict of Nantes of 1598 had guaranteed freedom of worship to Huguenots (French Protestants).  Its Revocation in 1685 (by Louis XIV, at the instigation of Madame de Maintenon, who had secretly become his second wife shortly before) led to large-scale emigration from France of those who feared subsequent persecution.

Two distinguished churchmen are also commemorated here.  The grave of Frederick Wallis, Bishop of Wellington, N.Z., is marked just east of the church by a tall memorial carved from a New Zealand tree, sent for the purpose by his erstwhile Diocese at the time of his death in 1928.  The rest of the timber was stored on the estate and used for Williams graves until it was finally used up in 1948.  Bishop John Wordsworth of Salisbury married (as his second wife) Wallis' sister-in-law, and he is commemorated with a plaque on the north wall of the chancel.  The father-in-law of both bishops, Sir Robert Williams of Bridehead (1843-1943) was President of the Church Missionary Society for over 25 years, among his many other public offices.

Historically, the parish of Littlebredy has been linked with those of Long Bredy and Compton Valence, but reorganizations in the late 20c have severed ecclesiastical links with the latter.  The parish is now the most eastern of the Bride Valley Team Ministry and the Deanery of Lyme Bay (in the Archdeaconry of Sherborne, Salisbury Diocese).

The Dorset Historic Churches Trust gratefully acknowledges the above contribution based on notes originally prepared by Judge Giles Best (resident of Littlebredy 1965 -1977) and supplied by Sir Philip Williams, Bt.