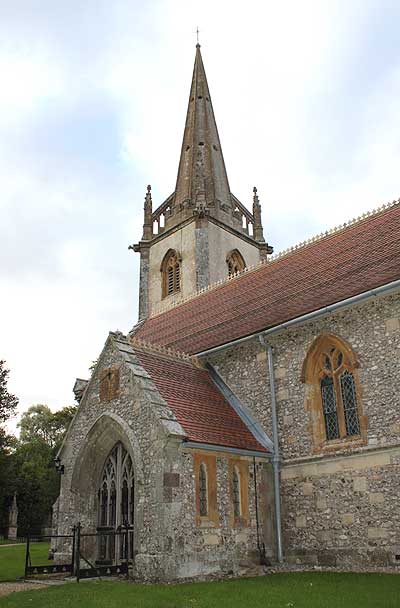 The present church, which replaced a derelict Saxon one on a nearby site, was completed in 1847.  Designed by George Alexander (d. 1883), it was his fourth and last in Dorset.*  Sir John Betjeman has described it as "one of the best and most lovely examples of Victorian architecture."  Although certainly an example of that period, the building beautifully catches the medieval Gothic style, with flying buttresses supporting the elegant steeple and is a perfect manifestation of Victorian Ecclesiological thinking. The brilliant interior is the creation of Owen Jones (1809-74), who is generally better remembered for his work on parts of the Great Exhibition of 1851.  The vivid colours and lavish decoration have an Arabian resonance, particularly in the chancel, and amply demonstrate his ardent discipleship of the great Augustus Pugin of the Houses of Parliament fame.

Of the many interesting fittings in the church the pews are particularly worthy of note because of their exceptionally simple and open design.  The church was built at a time when a certain degree of display was regarded as desirable and these pews assisted in being seen.

The whole cost of building was met by the incumbent, Anthony Huxtable. In 1840, he had the good fortune to marry a Dorset lady called Maria Langstone, who became a devoted wife and brought with her wealth, which by today's standards would have made them millionaires  He was also a tenant on two farms, became an agricultural pioneer, tireless social worker and sufficiently well thought of by the church authorities to be made Archdeacon of Dorset, albeit for only a few months before ill-health forced him to retire.  He died in 1883.