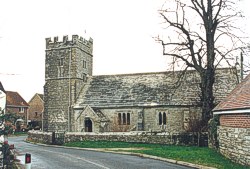 This gem of a church is impossible to miss because it is absolutely in the middle of the little village.  As with so many, there was certainly an earlier building on the present site because 15c windows have been re-set in the nave and the tower belongs to the latter part of 16c.

However, it is essentially a Jacobean church of about 1640.  The plastered wagon roof, the superb screen between the nave and chancel and the pulpit replete with a painting of St. Paul and tester are exceptionally pleasing.  The Communion rail is late 17c and the most impressive chandelier above the nave is dated at 1712.  There is an 18c western gallery with a good coat of arms on the front. Alas, the Victorians simply could not resist 'improving' this lovely building in 1898 by constructing a chancel to a design by Ponting.

The church is closely associated with Thomas Hardy, Dorset's world famous novelist.  In 'Tess of the d'Urbervilles' it is the setting for her marriage to Clare (see chapter 33) and the non-wedding of Christine Everard in 'A Changed Man and Other Tales - The Waiting Supper' Part II.