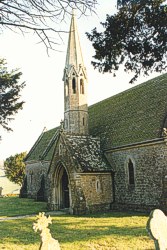 This is a delightful little Victorian country church, which replaced the nearby ruin of an earlier building.  It was built in 1861-62 to a design by John Hicks and many consider it to be his finest achievement.   The new building was very much the responsibility of Rev. Thomas Sanctuary, who was the Archdeacon of Dorset and vicar of Powerstock (1848 - 89)The setting is serenely peaceful and the building seems to harmonise extraordinarily well.  Sir Nikolaus Pevsner describes the 52 ft. octagonal minaret on the north side of the nave as a "tower with a spire".  It contains a single bell and is the most striking feature of the building, although the inside is also interesting.  The exquisite capitals were sculpted by Benjamin Grassby, who was responsible for work in several Dorset Churches.  Interestingly, Joan Brocklebank, in her excellent book 'Victorian Stone Carvers in Dorset Churches' suggests that there was some friction between Grassby and his Worcester employer during his employment on this project and may have led directly to his establishing a workshop in Powerstock to be near his patron, Thomas Sanctuary. The  brilliant white richly carved stone pulpit is certainly arresting, although this is probably the work of Grassby's erstwhile employer, R.L.Boulton.  The Victorian font is magnificent and the decorative floor tiling around it worthy of close inspection and very similar to those found in Powerstock.  The simple second font came originally from West Milton old church.     The Trust gratefully acknowledges images and text by Robin Adeney ©