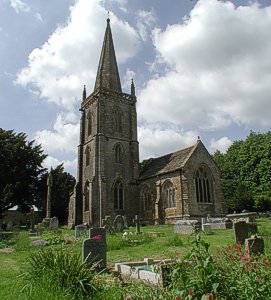 This church must rank among the most important in Dorset.  You have tantalising glimpses of the building as it is approached, but it is only when entering the churchyard that the beauty of whole suite becomes obvious.  Adjacent to the church stands the impressive chantry house of circa 1500, which was almost certainly built for a chantry priest.  There is now no sign of the chantry chapel, but his duties would have included saying daily masses for the souls of departed patrons: the living having probably been endowed in perpetuity.  Slightly to the south, stands the elegant remains of a preaching cross, modified in 1924 to serve as a memorial.Most impressive of all is the delightfully slender 14c limestone spire, surmounted by a copper weathercock from 1698. It was reputedly rebuilt in the early years of the 20c and is one of only three ancient spires in the county. (The others are Iwerne Minster and Winterbourne Steepleton) The south porch, through which the building is entered, is also 14c and attached to the wall is a painted early 19c notice asking the congregation to remove their "...pattens and clogs before entering the church"!  The rest of the building is essentially 15c.   The Trust gratefully acknowledges images and text by Robin Adeney ©