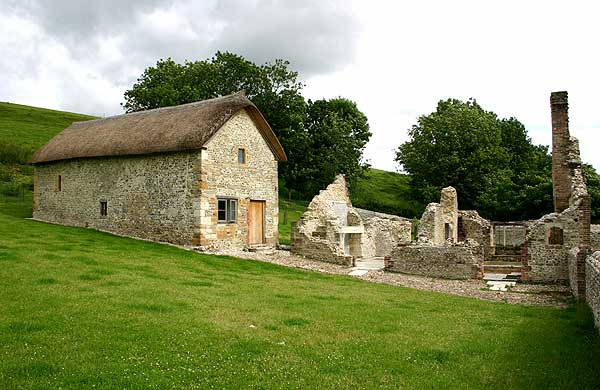 Buried in a fold of the chalk downland between the villages of Piddletrenthide and Cheselbourne rests a delightful relic of medieval ecclesiastical buildings. 3½ hides of land at Lyscombe formed part of the original endowment of Milton Abbey and was mentioned in 1311 with the chapels at Wooland and Whitcombe. It passed to Sir John Tregonwell when King Henry VIII granted him the Abbey's possessions in 1540.

The chancel is C12, but the nave was entirely rebuilt in C15 and C16. Originally, the east window was a single light that was widened in C13 and a chamfered trefoil head inserted. The Chancel arch is mid C12. The stone stair in the chancel is late C16 and gives rise to the proposition that the building may have been used as a dwelling. Alongside, are the remains of the priest's house.

Although in a ruinous condition, the buildings were Grade II Listed in January 1956. In 2005 the whole suite was repaired with a grant of £260,000 from DEFRA and converted into a public space and over-night shelter for walkers on the Downland Way through Dorset.

This is a most sensitive restoration in a beautiful setting, which generously rewards a visit.