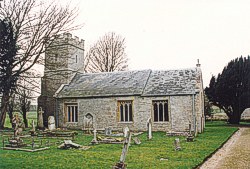 This little church, resting in a beautiful parkland setting beside a great house, will for ever be associated with William Barnes, the great Dorset dialect poet.  He was Rector here (with Whitcombe) for 24 years from 1862 until his death in 1886.It is a simple building constructed from stone rubble with a slate roof, consisting of just a 15c chancel and 14c nave with a western tower and north porch.  The roofs were restored in 1883 while William Barnes was still the incumbent.Inside, there is a superb wooden screen, incorporating linenfold panelling, that divides the chancel from the nave.  The pulpit is 1624and the oak Communion rails are similar.  The font is late Medieval. The oak lectern featuring a carved figure of St. Peter was given by the Dawson-Damer family in 1892.  Note also the impressive number of monuments and in particular the recumbent figures of John and Anne Meller who died in 1595 and 1610 respectively.Outside on the southern side of the building there is a grave surmounted by a simple Celtic cross, which marks the last resting place of William Barnes.  About halfway up the High Street in Dorchester on the northern side, there is a life-size bronze image of him - said at the time to be a very good likeness.This church is in the care of the Redundant Churches Fund.  There is an excellent guideThe Trust gratefully acknowledges images and text by Robin Adeney ©