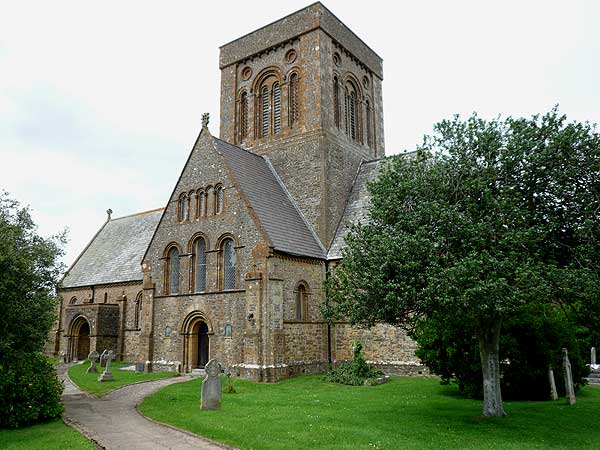 This is an interesting Neo Norman church of 1845 built at the expense of the local land owner, James Bandinel., to a design by Benjamin Ferry. He was a friend of Marc Isambard Brunel (father of the great engineer Kingdom Isambard Brunel) and was instrumental in the construction of the Thames Tunnel and at one time secretary to William Wilberforce. This large church was built in anticipation of a big increase in population to produce flax for the Bridport rope and net industry.  Unfortunately, it did not materialise.

The building is cruciform with a massive central tower containing just two bells.  Originally the sanctuary was apsidal, however in 1975, which marked the 900th anniversary of the Salisbury Diocese, a decision was taken to divide off the nave with a glazed screen and remove the pews.

The area is used for exhibitions, meetings, social functions and badminton.  In this bold and brave alteration, the altar was moved to the north transept, the apse became the baptistry and the south transept effectively became the nave.  The result is a building much used and a church more in keeping with the community it serves.  The guide says that before the alterations 50% of the income went in heating, now the revenue from badminton covers the cost.

Note, the church was modelled on the old Norman church at Shoreham in Sussex and the font is a copy of a broken font found at Whitchurch Canonicorum.