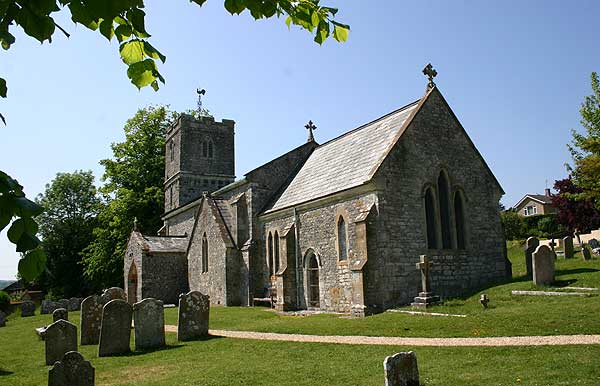 Not very long ago the village street of Tolpuddle was the main road from Wimborne to Dorchester and daily carried a huge number of vehicles. However, since the arrival of the magnificent dual carriageway to the north, the road has returned to its original purpose and is now a relatively quiet byway.The stone and flint church is mainly C12 and stands in a generous churchyard to the south of the road. It has a plain Norman south doorway and the lower parts of the somewhat slender tower are C13. The chancel is late C13, but was altered by T.H.Wyatt in 1855. The very impressive tie-beam roof of the nave is thought to be C14.The village will for ever be associated with the Tolpuddle Martyrs who lived here. In 1834, after a series of poor harvests, it was the reduction from the barely survivable wage of seven shillings a week to the starvation level of six shillings that propelled a group of Friendly Society labourers into forming the first trade union.  Not in itself an offense, but the thoroughly rattled landowners, led by James Frampton of Moreton House, saw to it that they were illegally convicted of a naval regulation forbidding secret oaths and had them transported to Australia .  As everyone knows, there was a public outcry and the Home Secretary was forced to issue a free pardon.  After returning, some of the men emigrated to Canada, but James Hammett returned to live in the village before dying in 1891. He is buried in the churchyard under a gravestone lettered by the eminent artist, Eric Gill.The Trust gratefully acknowledges images and text by Robin Adeney ©