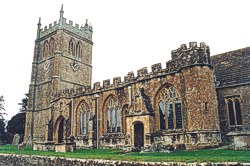 Bradford Abbas must rank as one of Dorset's most important village churches.  This is a largely 15c building with a magnificent embattled and pinnacle west tower with many niches, two still having the original figures.  Close to the tower is the remains of a 15c preaching cross.

The exact origins of this church are unknown, but according to the excellent guide book, when St Aldhelm became the Bishop of Sherborne in 705, his policy was to encourage churches in the nearby villages and this may have been one of them. Certainly, the present building was started by William Bradford, Abbot of Sherborne (1436 - 59).  Originally, there would have three altars in addition to the high altar.  By 1828 when a new incumbent was installed, he had to report that the building was in a sorry state with the roof leaking so badly that it could not be used in wet weather.  By 1848, things had improved and the seating increased by 183.  The wall above the rood screen and the box pews were removed in 1848.  In 1890 the roofs were completely repaired and the internal walls stripped of their plaster and re-pointed with the grim grey seen today.  The vestry was added in 1911.

The chancel screen is 15c.  The pulpit is good example of Jacobean craftsmanship and dated 1623.  There is a superb 16c font carried on four pillars decorated with the figures of Aldhelm, the first Bishop of Sherborne, Bishop Osmund of the 11c, Richard Beauchamp and John the Baptist.