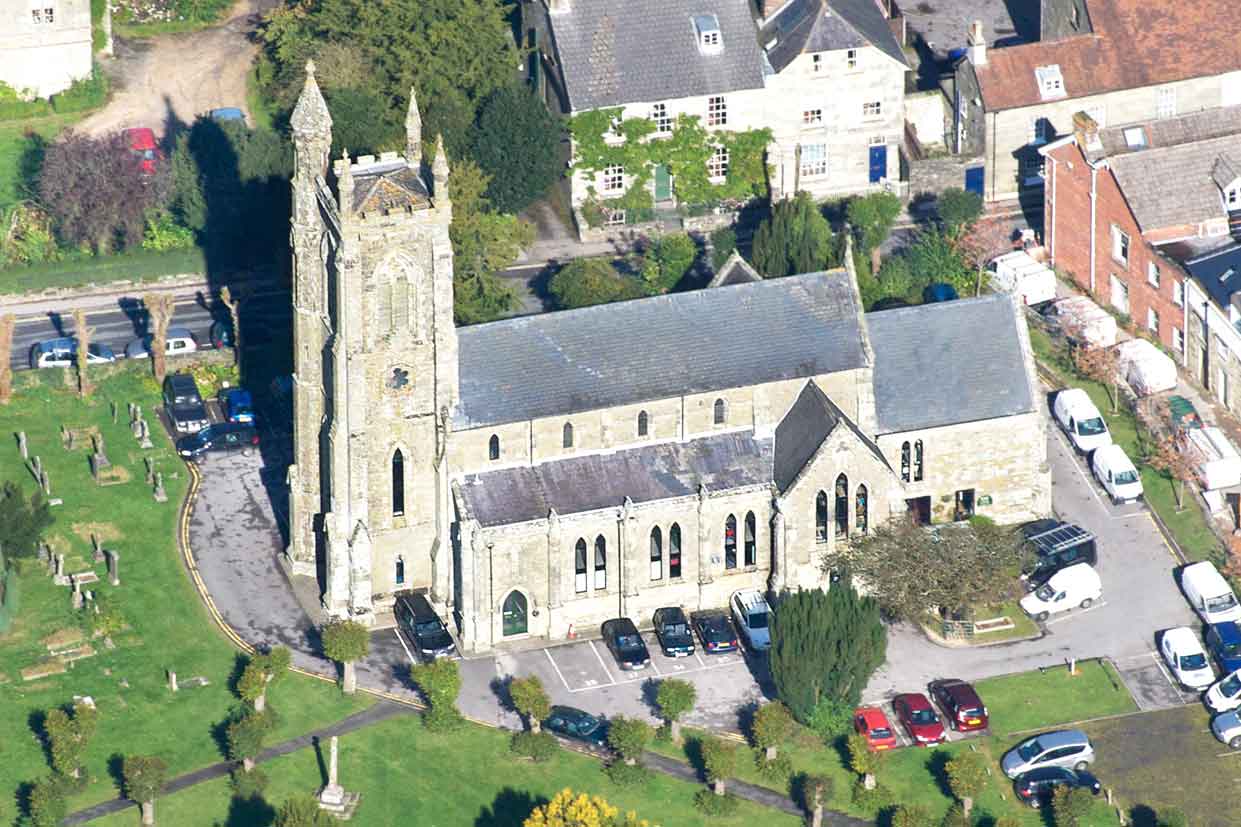 Gillingham stands on the northern edge of the Blackmore Vale and was once the centre of a Royal Forrest. It can trace its origins beyond the Romano-British period. Rather surprisingly it remained a relatively small rural town until the arrival of the railway in 1859, which prompted the creation of a number of industries, including a successful brickworksA Saxon church, dedicated to St. Mary, was well established at the time of the Conqueror and was a huge parish with a circumference of forty-one miles. The first recorded vicar was William Clyve de Motcombe who arrived in 1331 and it is known that a chantry chapel was established at about the same time. Jack Skelton-Wallace in his excellent book, 'A Selection of Parish Churches' suggests that the church was probably built between 1320 and 1330. However, what is certain is that in 1838, the tower was moved 20 feet in order to enlarge the nave for the growing population, although the chancel was left untouched and is therefore C14. The original pillars with their ball-flower decoration remain between the chancel and the north chapel. In 1908 the tower was extended upwards and given a battlemented top by the Diocesan Architect, C.E. Ponting. At the same time, the west door was remodeled.There are a number of superb memorials in the church. The Jessop memorial behind the organ of 1625 is dedicated to Drs. John and Thomas Jessop, who lie side by side on a tomb chest, under a disintegrating arch. John was vicar of St. Marys and prebend of Salisbury Cathedral (d.1625) and Thomas was a physician in the town (d.1615). The memorial to Frances Dirdoe of 1735 is memorable and beautifully executed with the Three Graces. In fact, Frances (died aged only 34) was from a family of fifteen siblings and the memorial represents her with two of her sisters, Rebecca and Rachel, who were her executors. Their father, Sir Henry Dirdoe's memorial is in the chancel.The most beautiful area of this interesting church is the chapel of the Good Shepherd, which was dedicated by the Bishop of Salisbury in 1922 and designed by W.D.Caröe (1857-1938), who was responsible, among many other things, for the magnificent reordering of the east end of Sherborne Abbey.  He was the architect to the Ecclesiastical Commissioners from 1895 to his death and was a major figure in the Arts and Crafts movement. The beautifully carved reredos depicts, Christ the Consolator flanked by St. George on one side and St. Louis of France on the other. At the top, extending from the canopy are exquisitely carved angels on either side. The chapel was given by Carlton and Emily Cross in memory of their son, Lieut. Reginald Carlton Cross, who died, aged 26, on 7th June 1918.The octagonal font is perpendicular with paterae motifs. The magnificent principal reredos with its representation of the Adoration of the Infant Saviour was designed by H.P.Burke Downing and carved by the internationally renowned Nathaniel Hitch when he was eighty years old.This is a wonderful church, which is well worth a visit. The Trust gratefully acknowledges images and text by Robin Adeney and DHCT for Arial Photography DHCT © 2018