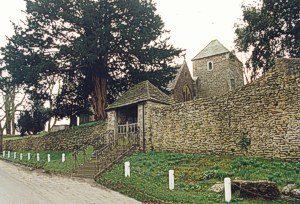 This is an ancient village even by Dorset standards with a name pronounced 'Punnle'.  There is plenty of evidence of dense population in the late Stone-age and the Romans were certainly here.  Today, the village is most attractive with a variety of old and new houses.The church sits above the village street and adjacent to an old mellow manor house that was once the home of Henry Shrapnell, who invented the shell that bears his name.  The building has its roots in the Norman period, but all that remains now are the chancel arch and the tower with its attractive pyramid roof, although there was some 17c reconstruction.  The wall paintings on the chancel arch are thought to be 14c.  During the Reformation they would have been obliterated with lime-wash and remained so until discovered during the 1891 rebuild.  Only the left hand section is really legible with two pictures that depict the placing of the crown of thorns on Christ's head and either the flagellation or crucifixion.  The simple wooden cross hanging in front indicates where the rood screen would have been.  In 1660, the south aisle, known as the Bexington Chapel, was rebuilt for the benefit of the people of Bexington following the wrecking of their church by the French in the middle of the 15c. Virtually the whole church was rebuilt in 1891 to a design by J. Houghton Spencer.  The pulpit is of this period.  The font is Norman.  Note the superb 1960s iron screen.Before leaving the village, notice the oriel windows of the houses opposite the church, which have panels of glazed tiles arranged below the windows.  The Trust gratefully acknowledges images and text by Robin Adeney ©