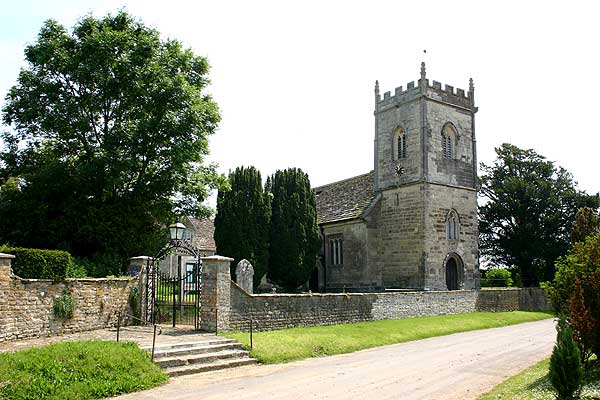 The best part of the village of Hinton St Mary lies to the east of the main road out of Surminster Newton. Here are a collection of beautifully mature houses and cottages and where the little church of St Peter, on one side reaches out to almost nudge the road, and on the other, reaches back to the exquisite manor house with its glorious gardens and magnificent C17 facade.The church is by William Oborne of 1846, who skillfully incorporated an existing late C15 tower. If the exterior has a very pleasing mellow feel to it, the interior, by way of contrast, is rather cold and austere. There is a splendid C12 lead lined tub font, still complete with iron rings that were once used to lock it against possible misuse by witches and a most impressive monument to Sir Thomas Freke, who died in 1642. (See Iwerne Courtney)On Friday 13th September 1963 John White, the blacksmith of Hinton St Mary, telephoned Roger Peers, the curator of the Dorset Museum, to tell him that he had found what appeared to be a Roman mosaic while mending a water pipe. This turned out to be the earliest representation of Christ found to date at about the middle of C4 and of the greatest historical importance. Two pavements were discovered, which had been laid in the country villa of a Romano British aristocrat. They were subsequently taken by the British Museum, but are surprisingly not on display to the general public. A plaque records the facts together with an image of Christ.The Trust gratefully acknowledges images and text by Robin Adeney ©