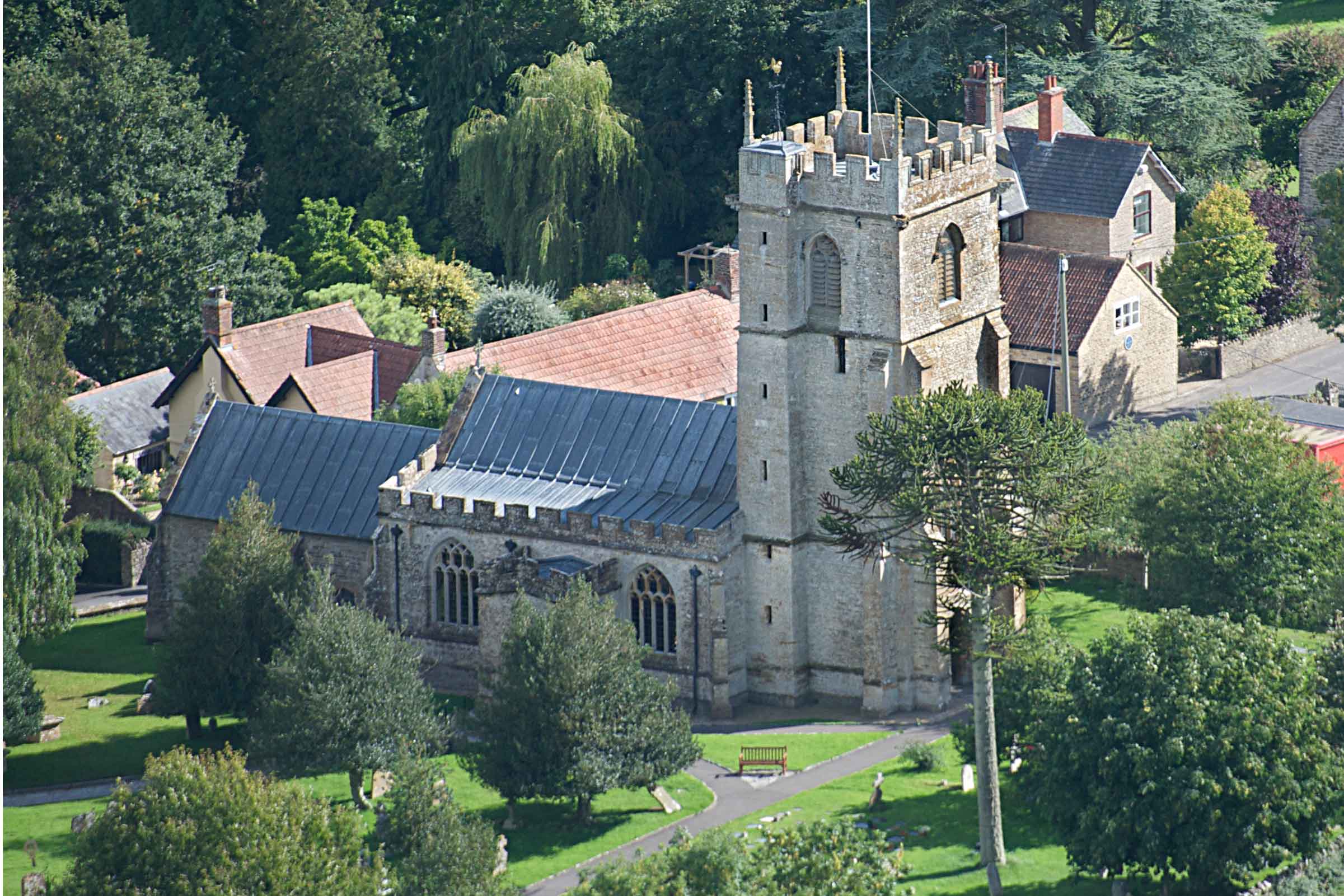 St. Andrews presides genially over the handsome stone houses of Yetminster, most of which date from the seventeenth century, when the village achieved an unusual prosperity. The church is much older: it has Saxon origins, and retains the carved base of a preaching cross of that period. What stands, however, belongs largely to the third quarter of the fifteenth century, except for the low and simple chancel, of about 1300, with its characteristic trio of lancet windows overlooking the street.

The fifteenth century work – nave, aisles, porch and tower – has greater pretensions, and is a good example of a uniform, aesthetically ambitious scheme undertaken on a relatively small scale and with limited means. The exterior, whose best face is to the south, is given grandeur by the row of large battlements that partly conceals the roof, by the sturdy elegance of the tower, and by the vigorous tracery patterns in the broad windows (recalling those of Sherborne Abbey). Eleven of the twelve original consecration crosses survive. The interior of the nave is appealingly spacious and light, thanks to its very broad plan, which (with its aisles) is nearly square, and to the tall wide arches that flank the main vessel. The lack of upper windows makes this, like St. John’s, Yeovil, a ‘hall-church’, echoing the great halls of castles and the open-plan ‘preaching churches’ of the Franciscans and Dominicans. Large parts of the original oak roofs remain (including the central one, a graceful semi-circular ‘barrel’ roof), as do some of the original benches.

From the artistic point of view the most precious feature is the amount of original colour that survives on walls, roofs and even benches. The survival of such a comprehensive unified scheme is rare. Though the traces of it are often faint, much decayed, or destroyed, what is left hints at an interior once ablaze with bright red, green, blue, white, gold and black. These colours were gathered in vigorous chevron or spiral patterns, or employed to pick out the foliate and heraldic decorations of the roofs, or to illuminate the sacred monogram IHS, the first three letters in Greek of the name of Jesus. Among the original carved capitals is one illustrating the favourite medieval joke of the geese (the hitherto gullible people) hanging the fox (the rapacious and mendacious friar). A more genteel but equally entertaining detail is the little horse on a boss in the roof, the ‘rebus’, or punning emblem, of the local magnate, Sir John Horsey of nearby Clifton Maubank, who may well have paid for the nave and tower.

The intervening centuries have seen the adornment of the church with attractive funerary monuments, notably the great early sixteenth century Horsey brass and the pleasantly naïve Minterne wall monument of more than a century later. Successive restorations have succeeded mostly in consolidating rather than replacing the medieval fabric. The most recent was completed in 2000; it attended to traditional re-leading of the roofs, modern electric wiring and lighting and necessary repairs to the external stonework.

The small but very beautiful organ, (Hill, 1880), was brought from Stone in Buckinghamshire in 1987. One manual with 6 stops and one pedal stop.

There is a ring of 6 bells: “two new, two recast and two historic. Well matched, steady-going and majestic”. There is also a Service bell. The oldest bell is about 1400, the youngest 1995.

A team of local people has beautified the church with hassocks, many of which have been specially designed for it. More recent still – the ‘Millennium Hanging’ all twenty-six canvas-work panels that show the life and history of the village, is now finished. These were designed to be used at special festivals and some of them are already on permanent display in the Trim Room, St. Andrew’s Hall. Viewing can be arranged by contacting the Churchwardens.

The Dorset Historic Churches Trust wishes gratefully to record its sincere thanks to Christopher, Frances and Patrick Moule for the preparation of these notes.

Yetminster is notable as the home of the medical pioneer of vacines, Benjamin Jesty a farmer, who in 1774, successfully immunised his wife and two sons against smallpox. http://en.wikipedia.org/wiki/Benjamin_Jesty