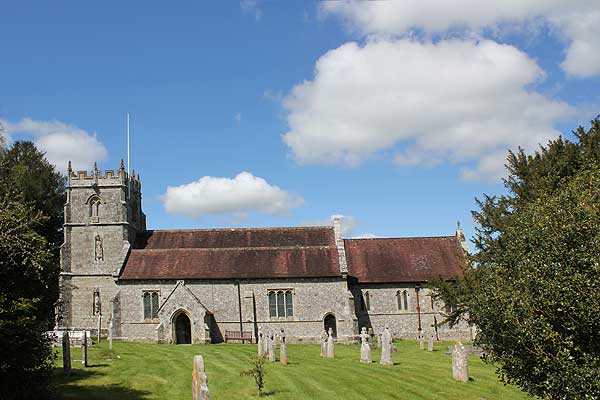 The bulk of Durweston stands to one side of the busy Blandford to Sturminster Newton road.  This was once part of the Portman estate, whose great house, Bryanston, is nearby.

The site has been occupied by a church for a long time.  The tower of the present flint and greensand building certainly reaches back to C15, although the rest is a skilful Victorian restoration of 1846 by P C Hardwick.  Durweston appears to have been his only church in Dorset, although he was responsible for a parsonage in Haydon, some interiors in Sherborne Castle and alterations to St Giles House (1854). The font is C12 or 13. Inside the church and above the south doorway there is an ancient sculpture of an apparently headless man shoeing a horse.  However, the horse is standing on only three legs, while the hoof and leg being attended to is separate!  This is the legend of St Eloy, the patron saint of blacksmiths and metal workers, who put the leg back on the horse afterwards.  He was apprenticed as a goldsmith in Limoges in France, later finding great favour with the king.  He became the Bishop of Noyon before dying in 659.

Perhaps the most important vicar to have held the living was the Rev Lord Sidney Godolphin Osborne, who arrived in 1841.  He was the brother-in-law of Charles Kingsley, the author of 'The Water Babies' and, for a while, curate at neighbouring Pimperne.  Although the aristocracy were well represented among Victorian clergy, it was usually the 'younger son' and only exceptionally rarely the title holder.  However, 'SGO' as he was known, proved to be an outstanding example of a campaigning parson.  He was appalled by the lot of the agricultural labourers in his parish and tirelessly promoted their cause through the press, by giving evidence to the Poor Law Commissioners and any other means at his disposal including reminding the Church of its responsibilities.  Of course these activities did not win him too many friends among the landowners and efforts were made to muzzle him, although without success.  Unemployment coupled with terrible conditions prompted him to encourage many to emigrate, some at his expense.  Between 1815 and 1895, 13 million people left the United Kingdom for good; 100,000 from Dorset alone. He died in Lewis, where he had retired, in 1889.

In 1991, the eminent sculptor, Don Potter, aged 89, accepted a commission to carve stone figures of the Madonna and Child and St Nicholas.  These have been placed in separate niches in the tower and demonstrate how this brilliant artist has harmonised his work with an ancient setting.  Don Potter was a pupil of Eric Gill before branching out on his own and teaching at Bryanston.  He died in 2004 aged 102.