All Saints Gussage All Saints 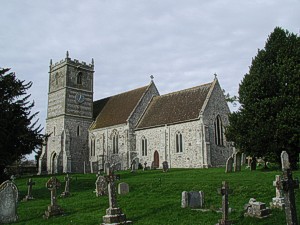 The church lies at the western end of the village, one of three Gussages. It is early Decorated 14c with a tower that was built in three stages and finished in 15c. The first recorded vicar, Galfred de Wermondsworth, was installed in 1347 and the parish registers go back to 1560.The interior is impressive with a very lofty feel.  The Victorian restoration by the architect, Ewan Christian, involved moving the original chancel arch to the north wall in order to form a frame for the organ.  The present chancel arch was installed by the eminent Dorchester architect, John Hicks, The east window, by Bell & Beckham, was installed in 1909 in memory of Rev Waldey.The most attractive one-manual 18c Walker organ was a gift from the incumbent, Rev Charles Waldey (1857-75), who was responsible for the church restoration.  The instrument, contained in a mahogany case, had originally been designed for use in a private house and was later used by Sir James Turle at Westminster Abbey for choir practice.On the north wall of the nave, near the impressive Victorian pulpit, is a shallow recess containing a tomb, which is canopied with crocheted ogee cusping and wall flower decoration.  This arrangement prompted Sir Owen Morshead to suggest that it is an Easter Sepulchre (the only other one in the county is at Tarrant Hinton). However others do not agree because a skeleton was found in it during the 1860 restoration.  Note, under the pulpit there is some exquisite carving. The Trust gratefully acknowledges images and text input by Robin Adeney ©