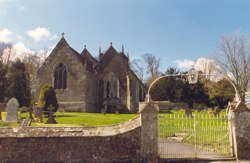 The church was rebuilt in 1610 in the true Gothic Survival manner at the expense of Sir Thomas Freke, who died in 1645.  In the same year, the building was used as a temporary gaol for 300 Dorset Clubmen, who had failed to escape after their defeat on Hambledon Hill.  However, Oliver Cromwell apparently thought them "Poor silly creatures" and set them free after they "had promised to be very dutiful for time to come."The west aisle was extended in 1871 and in 1872 the chancel was drastically altered internally and provided with a new window.  The attractive reredos is of terracotta and was made locally to a design by Lady Baker. It features corn ears and grapes and an exquisite head of Christ, which is flanked by an angel on either side.Dominating the north aisle chapel, is a huge monument to Sir Thomas Freke, erected by his two sons, Raufe and William, in 1654.  Sir Nikolaus Pevsner rather charmingly describes the sculpture as "inept if loveable!"  In front, however, is a beautiful, delicately carved, oak screen, which is of exceptionally high quality.Also of interest is the generous boot scraper outside the porch and the collection shoes inside. The Trust gratefully acknowledges images and text by Robin Adeney ©