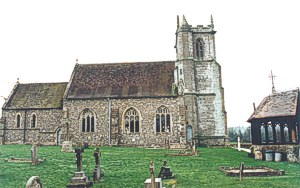 The village has its origins in the Saxon period and the name derives from an amalgam of 'Stour', from the river that flows past and the lords of the manor, whose name was Payne.  Yet from the lower Blandford to Shaftesbury road, Stourpaine, despite its antiquity, does not appear to be much of a settlement.  However, this is a poor conclusion.  Unseen from the road, there is another running more or less parallel, which serves the bulk of this attractive assortment of houses and the church lies at the southern end.

There appears to be some doubt as to whether there was a Saxon building, but by 1085 the village was sufficiently important to rate an entry in the Domesday Book.  This suggests that there may well have been a church although no record survives.  Records do exist to confirm a building begun in 1190 that survived until 1300.  During the 15c the original tower was pulled down and the present one erected in its place.

By the 1855, the church, along with so many in the County, was reported to be in such a poor state of repair that the architect, T H Wyatt, was forced to report that, apart from the tower, the whole building would have to be rebuilt.  It is, therefore, a 15c tower attached to a Victorian church.  Wyatt preserved two perpendicular windows from the old structure and installed them in the the north wall of the new nave.

During the restoration (1858), the ancient font disappeared and had to be replaced with a 'new' one.  There is something of a history of old fonts going missing during the 19c, probably because they were considered coarse.  Other examples can be found at  Beaminster, Chaldon Herring and Kimmeridge. The present organ, by Forster and Andrews of Hull, was installed in 1882 at the expense of the incumbent, Rev R R Watts, at a cost of £95.

A decision was taken in 1911 to replace the rather dismal pine pulpit.  However, the cost of a replacement was prohibitive, so five men, including the vicar, set about creating a new one.  The 'labour of love' lasted for three years of spare time and the new, beautifully carved, oak pulpit was dedicated by the Dean of Sarum on 27th September 1914.

An important 1670 memorial in the tower, to John Straight, a Puritan Vicar is worthy of close inspection.

There is a really excellent church guide.