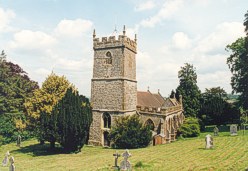 There has been a church in this delightful setting since, at least 1315, when the list of known vicars was started.  None of the original structure remains because it was entirely rebuilt in 15c.  Of this work only the west tower, three bays of the south arcade, the north porch and parts of the north wall survive.In 1746, in common with many others, the building was found to be badly decayed and the whole was repaired and the vestry rebuilt at the expense of one Thomas Hollis.  By 1876 the church was once again in a sorry state and was rebuilt and expanded by extending the nave eastwards and enlarging the chancel and south aisle.  These works were to a design by Mr Allen of Crewkerne and mostly paid for by George Troyte-Chaffyn-Grove.Note on the list of Rectors William Grey, who in 1512 was only 21 years old and had to have a dispensation from the Pope.  The Trust gratefully acknowledges images and text by Robin Adeney ©