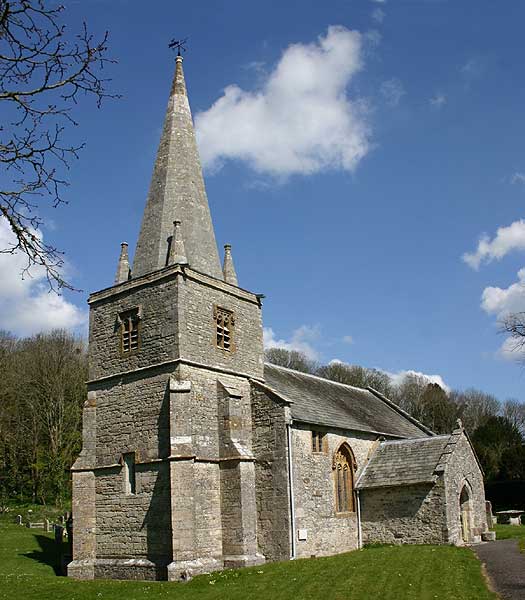 St. Michael and All AngelsThis delightful little building, which succeeded a much earlier pre-Conquest building, rests at the bottom of a beautiful wooded valley at the entrance to the village it serves.It is a most important church, because it is essentially Saxon, although most of the nave was rebuilt by the Normans.  The tower and porch are C14, but the spire had to wait until C17.  It is one of only three ancient spires in Dorset, but this one is the oldest. (The other two are Trent and Iwerne Minster.)There is a gallery of 1708 that stretches across the west end that would once have supported the church band.  In 2004, Patrick Grove-White painted an exquisite Royal Coat of Arms as a thanksgiving for his recovery from illness, which is now hanging in front of the gallery.  Note the carved angelic figures in the chancel.  The pulpit is modern, but incorporates Jacobean panelling.  The font bowl is C12 supported on a C13 shaft of Purbeck marble.  There is evidence of hinges that once would have supported a lockable lid to deter the theft of holy water, sometimes used for sacrilegious activity.Note the fragments of wall paintings on the north wall of the nave, however, by far the most important item in this church is the Saxon sculpture of a flying angel, secured to the north wall of the chancel.  Originally, it was almost certainly one of a pair, set either side of the rood in the original church.  A similar sculpture can be seen at Bradford-on-Avon. However, some say it lacks the energy of this one.The Trust gratefully acknowledges images and text by Robin Adeney ©