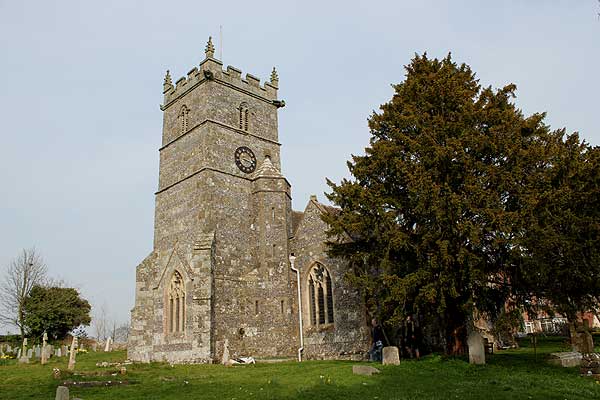 Sixpenny Handley is the largest village in the north Cranborne Chase. It is an ancient place and close to the burial mounds on Worbarrow, which was originally excavated by the great General Pitt-Rivers.   Unfortunately, much of the old village was destroyed in 1892 by a fire started in the wheelwright's shop.

The church, which stands on raised ground at the top of the village, is mainly a Victorian rebuild of 1872 to a design by G.R. Crickmay. The flint and stone banded C14 west tower is part of the rebuild, but the chancel is early C14. Inside, the slightly plain decor has an appealing lightness about it and although Jo Draper, in her magnificent 'Dorset - The complete guide', describes the pulpit as 'monstrous' this commentator thinks it harmonizes well with its surroundings. The reticulated tracery in the east window is particularly fine. The Purbeck font is a C12. There is a monument to John Alie of 1579 and a badly worn Norman sculpture of Christ seated.