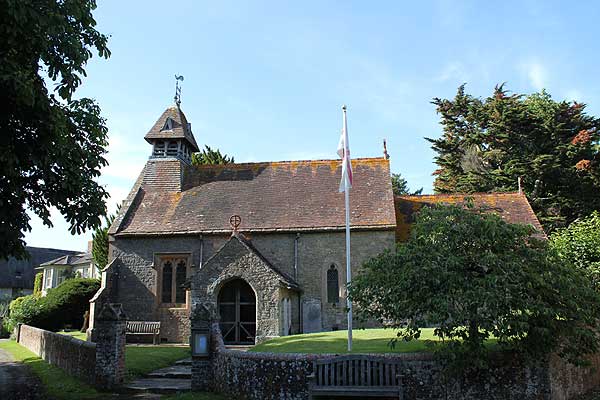 HammoonThis delightful little church stands in the centre of the hamlet of Hammoon, just to the north of the remains of a C14 village cross.  The chancel and the south wall of the nave are C13.  It was altered in C15 and again in the C19 when the nave was lengthened and the little bellcote added.  The early C15 reredos is particularly important because it is a fine example of West country work.  It was found in a south London dealer's yard in 1945 and had been an overmantle to a fireplace.  It is thought that it had originally been created for a church nearby since it is made from local Ham stone.The roof is a good example of C15 construction by a double framed pitch with moulded and cambered tie beams connecting the principal rafters.  The oak pulpit is dated 1635 and the font is C14.  There is a large sculpted C14 head, reputedly taken from the bridge, but which may well have originated in the church.  Note, the largely unexplained offset of the chancel - it is aligned with the nave, so that it cannot be said to be 'drooped'.  The Trust gratefully acknowledges images and text by Robin Adeney ©