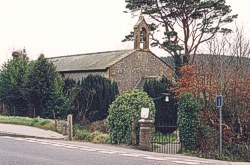 This simple chapel-style building that lies to the south of the main road in the village well-known for its Dorset knobs, gives no idea of the interesting things inside.  It was erected in 1841 largely at the expense of the incumbent of Whitchurch Canonicorum, in whose parish it rests.  The design is probably by T.H.Wyatt and Brandon.  It replaced the ancient 13c church at Stanton St. Gabriel, which had fallen into a ruinous state.

The chancel screen is of particular interest because it was formed from what was left of the rood screen at Stanton St. Gabriel.  Note, the tub shaped Norman font, the new, most attractive, chiselled texts, picked out in red, in the porch and a most moving painting of Christ on fabric. There is a generous pulpit and the little organ at the rear of the building came from an obsolete Methodist chapel, for a nominal sum because "it would be used for the glory of God."