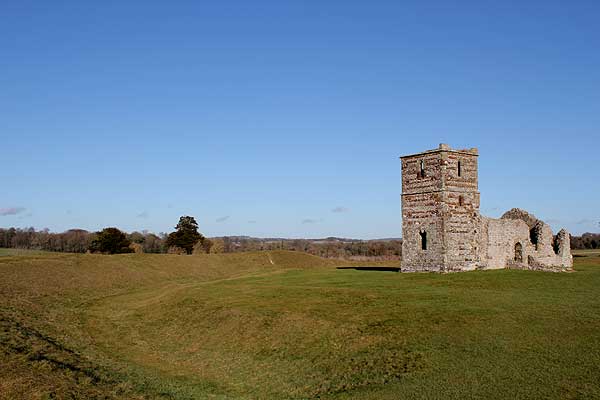 North of the Horton Inn and west of the Wimborne to Cranborne road lies an ancient circular neolithic henge earthwork (135 ft in diameter and 12 ft high).  In the middle, rests the remains of a little church, the only structure left from a once thriving village.  It is very possible the community was wiped out by the Black Death, but in any event the church itself was finally abandoned in C18.  (The Black Death, or Bubonic Plague, entered England at Melcombe Regis in 1348 and spread very rapidly, claiming between a third and half of the population. There was a second epidemic in 1361.)  The tower is C14 and the nave C12 with Norman doorways.  Its font is now in the Woodlands church.

There have been suggestions that the church may have been deliberately built in the middle of an ancient and probably sacred henge as a statement of the ascendancy of the (new) Christian religion.