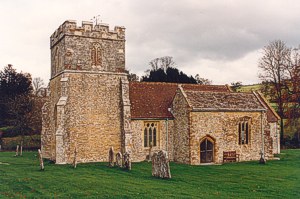 This delightful little country church rests in the grounds of a great house in what must be described as an exquisitely beautiful setting.

There was certainly an earlier church on the site, the records of which go back to 1150 and are held in the County Museum Library, however the present building is thought to be 14c.  The tower is mid 14c and has a window with reticulated tracery.  The Horsey  Chapel on the south side is 15c and is separated from the nave by an oak screen with the initials S.T.F (Sir Thomas Freke) and dated 1619 on the reverse.  Sir Thomas Freke is more associated with Iwerne Courtney (Shroton) where there is a superb oak screen in front of his memorial.  The Chancel was added in 1844, also with a reticulated tracery window.  The present font is Norman and was brought from the chapel at Higher Melcombe in 1951.  The pulpit was bought from the Bastard brothers of Blandford in 1723.

There is a stuffed owl perched high up on the north side of the chancel arch whose job is to deter bats!