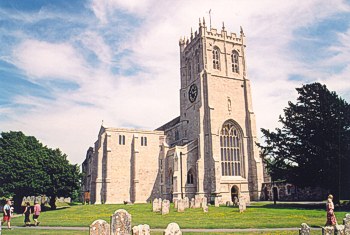 The approach to the town of Christchurch from the west is rather dismal.  Nevertheless, once in the High Street one is soon encouraged by glimpses of the great tower of the Priory.  However it is not until entering the churchyard that the enormous size of the building becomes obvious.  The great west tower of 1490 and the huge C14 porch, where the prior met the civic dignitaries, dominate the view.CHRISTCHURCH PRIORY is said to be the longest, at 310', parish church in the country and it is certainly one of the grandest and most interesting. The exterior of the 12th Century North transept is an astonishing piece of decoration. The huge North porch, of the 13th Century, provides as impressive an entrance as can be imagined and leads into the three-storey Norman nave, the vault of which is actually of plaster, added by Garbett, who did much work at Winchester Cathedral, in 1819. The 13th Century provided the clerestory and the aisles so the nave represents a long running building campaign. The crossing, probably originally supporting a tower, and transepts are also fine Norman work but passing through the remains of a once-splendid 15th Century screen one finds oneself in the Great Quire which, with the Lady Chapel, further East still, dates from the early part of the 16th Century; apart from Bath Abbey and the Henry VII chapel at Westminster Abbey it is one of the last major contributions of monastic building before the Dissolution. The vault is a splendid lierne with pendants running down the sides, a motif repeated in the ornate Lady Chapel, almost a separate building. From a little earlier is the West tower, big and tall but almost dwarfed by the great length of the church.There are very many treasures, the greatest of which is undoubtedly the magnificent 14th Century Jesse screen behind the high altar. Even though many of the figures have gone one can appreciate the power of the reclining Jesse, flanked by David and Solomon, in the bottom stage; in the next the solemn adoration in the face of a kneeling king presenting his offering to the Christ child; and in the upper stages the exuberant portrayal of the ox and ass, the shepherds with their dog, the sheep on the hill and the angel choir above. Beside it is the huge and jewel-like chantry, never used for its purpose, of the Countess of Salisbury, who was beheaded on Tower Green on the orders of Henry VIII - she was connected with all the families who had a better claim on the throne than the 'upstart' Tudors. The woodwork, including magnificent misericords, in the Quire and the stonework in the Lady Chapel are of the highest quality.The Trust gratefully acknowledges images and text by Robin Adeney ©