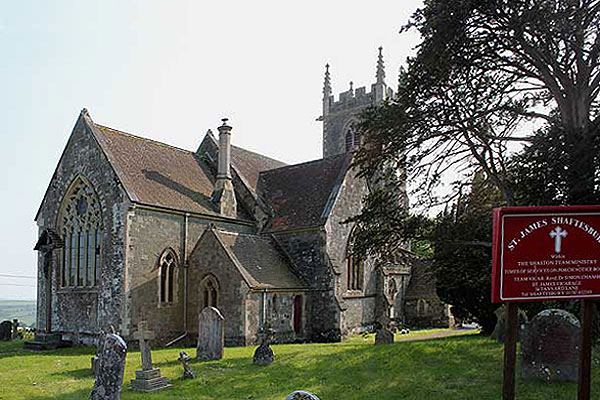 Modern Shaftesbury has emerged from a genuine fortified hill town that overlooks, without dominating, the Blackmore Vale. The site was chosen because the slopes on all sides, except for a narrow strip on the north east, are very steep and therefore comparatively easily defended. There has been a settlement here from C9 and King Alfred founded a nunnery for his daughter, Ethelgiva. By C14 Shaftesbury had become the most populous town in Dorset because the nunnery were the custodians of the bones of Edward the Martyr, which guaranteed it as an important place of pilgrimage. (For about this saint see the Corfe Castle entry).

The parish of St. James extends below the high ground, on the southern side, and can be reached via the world famous Gold Hill, which connects it to the centre of the town.

The original church is thought to have been built in 1138, however the first recorded rector was appointed in 1327. It stood in open ground until 1725 when it was enclosed by a stone wall. By the middle of C19 it had, in common with many others in the county, become very dilapidated and could only accommodate 200 of the 1,000 then living in the parish. A decision was taken with the approval of the Church Building Committee for Dorset, to demolish the old building and rebuild a much larger church with a seating capacity of 400.

The Diocesan Architect, T.H.Wyatt, rebuilt using green sand stone with dressings of Bath stone in the Decorated (or Middle Pointed) style at a projected cost of £3,000. £2,000 was donated by the Marquis of Westminster, who owned most of Shaftesbury and the rest was found from other notables. The foundation stone was laid on 28th May 1866.

By any standard, this is an impressive church and on entering the eye is naturally drawn towards the the large and rather beautiful east window. Below stands the 7 foot altar decorated with five panels of angel musicians, copies of those in the church of St Mary the Virgin, Studley Royal in the Fountains Abbey estate, and painted during the 1900s. The relatively simple pulpit also has five panels. Note especially the beautifully executed carved capitals on the aisle pillars. The south aisle contains the Blessed Sacrament Chapel, where the architect used the east window from the earlier church. Originally it had plain glass, but was installed here with stained glass.

The important two manual organ is by Norman and Beard of 1908. It was refurbished in 2008.

The font is Norman. It was originally in the church of St. Rumbold in Cann on the Salisbury road until it was deconsecrated.

There is a really excellent church guide.

This is an obviously much loved church that is well worth a visit.