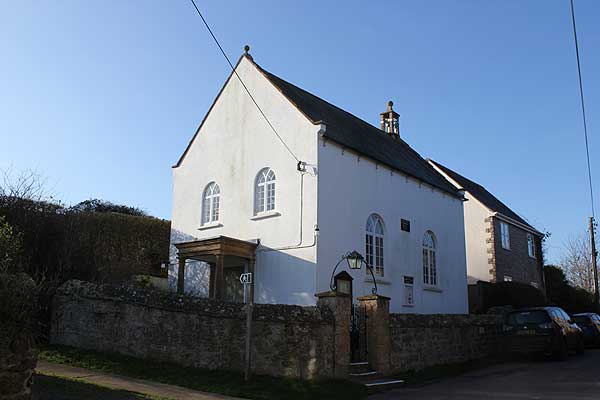 Methodist ChapelThe small Methodist chapel was built in 1827 and is the oldest chapel in the Bridport and Dorchester Methodist circuit. It was constructed of stone and has a most attractive door with pilaster framing and a porch supported on Tuscan columns with entablature over. Above the west gable, there is a stone bell-cote with a ball finial above. In the old days the bell was rung for services and fairly frequently to warn of fires in the surrounding thatched roofs.The plain white interior is pleasingly simple and the eyes are naturally drawn forward towards the simple and very moving wooden cross, set on a pale green background, framed in gold. At the back, there is an elegant gallery above, on one side, a modern organ and on the other, a brilliant, almost hidden, miniature kitchen with attendant let-down serving hatch. The whole interior is flooded with light from six Georgian style round headed windows.There is an intriguing clock on the front face of the gallery, with its works behind and powered through a cable and a series of pulleys by a weight that hangs by the north wall. It was a gift from Dr Giles Roberts, a popular lay preacher, who was born in West Bay in 1766. He is particularly noted for his famous medicine 'The Poor Man's Friend', which was manufactured for 150 years and sent all over the world.In 2006 the interior of the chapel was entirely re-ordered. The old pews were removed and modern chairs installed together with a new cross, altar, minister's desk, chair and hymn board by the church furniture maker, Ronald Emett of Broadwindsor.The chapel is a little jewel of a building that literally sparkles with the obvious love of its congregation.The Dorset Historic Churches Trust wishes gratefully to record its sincere thanks to Mrs. Ruth Standerwick for the assistance received in the preparation of these notes.