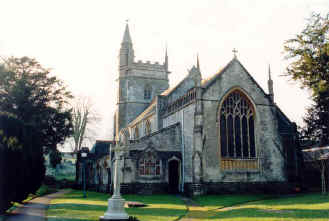 PimperneA church has been on this site since Anglo-Saxon times, however it was rebuilt in 1873-4 at the expense of Viscount Portman of Bryanston.  Two original Norman arches remain, one between the porch and the church itself and a dog-tooth arch on the north side of the chancel.  There are some important stained glass windows.  The east window of 1868, which is largely painted,  was transferred from the old church.  Charles Kingsley of 'Water Babies' fame was a curate here in the early 1840s.  The Norman font has an unusual replacement cover of unknown vintage, but of exceptional quality.Outside, there is a lych gate erected by the Woodhouse family as a World War Two memorial.  Beyond this stands a 14th century preaching cross, which was reduced in height during Cromwell's rule, when all were supposed to have been cut down to the height of a man.   The Trust gratefully acknowledges images and text by Robin Adeney ©