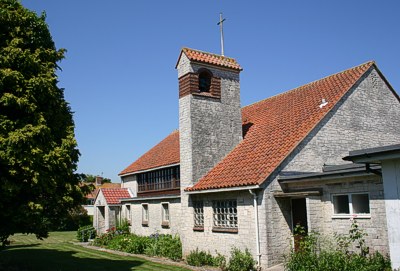 This is an interesting and excellent example of a 1950s urban church set in a generous and beautifully maintained garden.  In 1950, the church authorities felt there should be a new parish established by combining parts of the parishes of St Pauls, Weymouth, Wyke Regis and Chickerell and Radipole, primarily to serve the Lanehouse estate area.  A vicar was appointed, but as there was no church, the congregation met in their homes before temporarily borrowing a canteen.  Eventually the M.O.D. gave them an ex-military hut.  However, serious planning and money raising began in 1951.  Much of this money was raised through the then pioneering idea of selling individual bricks. The architect instructed was Colin Crickmay R.I.B.A., whose firm of Crickmay and Sons has an impeccable pedigree in church design stretching back to the days of an association with the great John Hicks of Dorchester and Thomas Hardy.  It is not surprising then that this intriguing building was skillfully created despite a tiny budget of just £10,500, which restricted the congregation to 120, and stringent post war controls on the use of materials.  An excellent example of his ingenuity was the use of timber frames constructed in box-section as the main structural members, whereas more normally steel girders would have been employed.  St Edmunds became a parish in its own right on 28th February 1956.  It was the first church to be built in the Salisbury Diocese after World War II.

The site is adjacent to a busy road and, being much longer in the north/south axis, the building takes advantage of this by placing the sanctuary at the southern end rather than the more traditional east end. This arrangement also permitted any subsequent expansion of the nave towards the north without disturbing the sanctuary.  Furthermore, to the south, it allowed for the current extensive suite of church meeting rooms, kitchens, offices, lavatories and ultimately a generous church hall complete with a fully equipped stage.

The building is constructed of stone under a conventional tiled roof.  This otherwise quite simple design has been hugely enhanced by the addition of a bell tower.  This takes the form of tall pillar, capped by a tiled roof, which houses a single bell in a brick decorated aperture.  A 10 foot tall and very slender cross, made from teak, surmounts the whole and completes this very pleasing ensemble.

Inside, the area is flooded with light from the generous fenestration provided by clerestory windows and more in the north wall.  There is a simple pulpit on the eastern side and, on the other side, an intriguing sedilia and credence, that certainly cleverly borrows from earlier designs.  The choir stalls, arranged on either side of the organ, are at the back of the building.  The arrangement gives the congregation an intimate view of the altar and was a deliberate design decision.

The dedication to St Edmund of Canterbury is an interesting choice because he is one of the few English Saints and, most appropriately, a Saint of the Salisbury Diocese.  He was born towards the end of the 12th century and at an early age received a vision of the Christ Child beckoning him into a life of prayer and service.  After education near Oxford and in Paris, he returned to Oxford to found and build a hall, now thought to have occupied the same site as today's St. Edmund Hall.  In 1222, he became the Treasurer of Salisbury Cathedral under Bishop Richard Poore.  (See Tarrant Crawford)  He eventually became Archbishop of Canterbury, but found the corruption of the English Court and the intrigue and oppression of the Papacy almost intolerable to reconcile with his determination to defend the liberties of his flock.  After only six years he made the only protest left open and exiled himself to the Abbey of Pontigny in France.  He died one month later on 16th November 1240.  To this day his remains still lie under the high altar.

The Dorset Historic Churches Trust wishes gratefully to record its sincere thanks to Mr and Mrs De Havilland for the kind assistance given during the preparation of these notes.