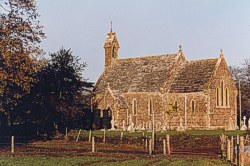 The first record of East Holme is in The Domesday Book where it says 'Elured' held the area before the Norman conquest of 1066 and goes on to mention that "it paid a tax for 2 hides and a virgate of land (about 30 acres). Four villagers had 1.5 hides and a virgate and the value was 20s."

In 1142, Robert de Lincoln gave the manor of Holme to the large Priory at Montacute on condition that they provided four monks in a cell to chant there throughout the year for the souls of certain members of the de Lincoln family. A small 'alien' Cluniac priory was built, which stood behind the present Priory house. Alien houses were founded by wealthy French nobles and given as presents to their favourite Norman monasteries. Some were virtually independent of their foreign superiors while others were not and their priors subject to dismissal on a whim. The 'cells' were very much 'branch offices' and often places of punishment for disobedience or insubordination to a superior. The fortunes of all these establishments depended on the political scene with France and when the two countries were at war, they were subject to temporary seizure.