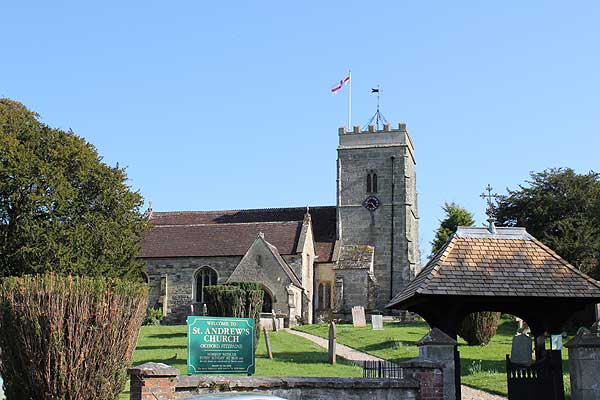 This is an interesting and impressively large church that is sited on slightly rising ground. Perhaps the most interesting aspect is the tower, which is a strange mixture of C14 and C15. The rest is Victorian 1865-6, designed, with great care, by John Hicks of Dorchester, who used much of the material from the original church. On entering the nave, one's eye is immediately drawn towards the magnificent pulpit fashioned from brilliant white Caen stone, still bearing some original paint and accommodating a number of beautifully executed figures in niches. The church pamphlet speaks of the pulpit having been once a font, but converted back to its original purpose with improvements, during the 1865 restoration.

The north aisle shelters the Lady Chapel with a most attractive window that borrows strongly from William Holman Hunt's painting of Christ as 'The Light of the World'. Looking west, the principal feature is the baptistery formed in the space immediately below the tower. The font of 1844 by Boulton of Worcester, is made of Caen stone supported on a shaft of red alabaster and decorated with three sculptured kneeling angels, holding in their hands the shell, the dove and the Lamb as emblems of the Trinity.

To the left of the baptistery there is stairway leading to the bell ringing chamber for six bells. There was a tragedy in 1957 when the Rector, W.R.Mortimer was showing some school children the bells while they were 'raised'. Quite appallingly, the fifth bell was somehow released causing it to overturn and he was killed.

This is a really magnificent village church, which well rewards a visit.