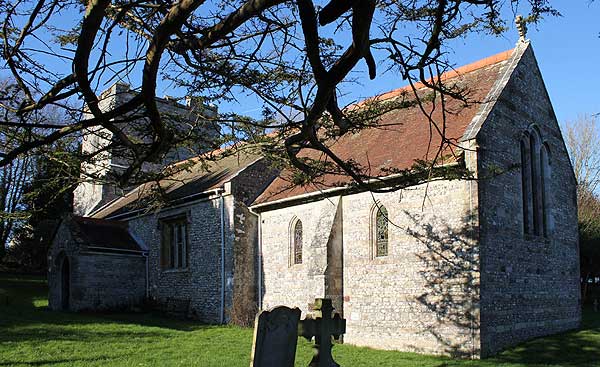 This village is an ancient place with the Iron Age earthwork, Weatherby Castle, only about a mile to the south.  The novelist, Thomas Hardy, renamed the village 'Millpond St Jude' when he featured it in his book 'Far from the Madding Crowd'.  As is so often the case in Dorset, there has been a church on or near this site for more than 900 years.  The Saxon building was almost certainly constructed from wood and there is no sign of it now.  The present building dates from about 1150 and the nave has remained Norman.

The wagon roof to the nave is C15 and the three-light window on the south wall is C16.  The south doorway is Norman and is protected by a C15 porch.  Note, the scratch dial at the south east angle of the nave (see Guest Contributions).

In 1878, the Victorians could not leave the venerable old building alone and employed the eminent architect, George Street, to drastically alter it.  He rebuilt the chancel, resetting the tall three-light lancet east window and created the single-light windows with stained glass.  He added the north aisle and arcade together with all the pew furniture and pulpit.

During the Victorian period it was sometimes the fashion to throw out ancient fonts and Street did just that, installing in its place a new replacement.  Fortunately, the old Norman font, decorated with a cable motif, was rediscovered in 1930 and put back in the north aisle, where it remains in use to this day (see Kimmeridge).

In the sanctuary there is a small canopied table-tomb in memory of John Morton, whose uncle was Cardinal Morton, Archbishop of Canterbury and Lord Chancellor of England (see Bere Regis).  His grandfather was a Turberville and therefore a theoretical ancestor of Hardy's Tess of the D'Urbervilles.