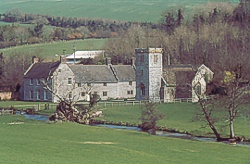 Nether CerneThis must surely be one of the most attractive suites of buildings in Dorset, resting on the banks of the river Cerne and incorporating a medieval church and a 17/18c mellow stone manor house.  The parish was once part of the endowment of Cerne Abbey and was served by its Benedictine monks until the dissolution of the monasteries in 1539.  After that it was a 'perpetual curacy' served by various other parishes until services ceased in 1968.  It was finally declared redundant in 1971 and came to the Redundant Churches Fund in 1973.The nave and chancel are one and together with the south chapel originate from the late 13c.  Along with many Dorset towers, this one was also built late in the 15c, although it differs from most in being adorned by angels rather than gargoyles. In 1876 the whole building was restored.  The Purbeck stone font is Norman and has a fluted and ribbed cauldron bowl.In the floor there is a slab in memory of John Dammer who died in 1685.  He is thought to have been the great-grandfather of the first Lord Milton who was responsible for building the mansion house at Milton Abbey (see Milton Abbey).   The Trust gratefully acknowledges images and text by Robin Adeney ©