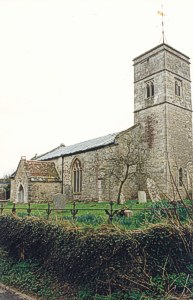 West Knighton is well away from a main road and despite being only about three miles from Dorchester and having some doubtful housing development nearby, the area around the little church remains tranquil and in keeping with it.

This small building is reached via some steps with an intriguing boot scraper built into the wall.  It has Norman origins and the chancel still contains their work in the form of the east window and the wall separating it from the nave.  The first church probably consisted of little more than a nave and chancel.  The present chancel arch is surprisingly small, making it quite difficult for some of the congregation to observe the ritual.

The church was rebuilt and enlarged in 13c when the first two stages of the tower were erected and the south transept added.  The final stage of the tower had to wait until 16c.  Marks on the tower bear witness to a much steeper roof prior to the present pitch, suggesting that it may have been thatched at one time.  The porch maybe 16c.

There is a most pleasing gallery across the west end of the nave.

The church has clearly been altered several times over the centuries, but the restoration of 1893 was particularly significant.   At the age of 53 Thomas Hardy, the novelist who had started his career as an architect, took charge of the work.  Although he had been articled to John Hicks of Dorchester, who had been responsible for more church work in the county than anyone else, the sometimes mindless tearing down of ancient buildings simply to make way for what was perceived to be improved design had appalled him.

Hardy approached the work with great care and he was responsible for replacing the gallery, new tracery in two windows in the north wall of the nave and a completely new window in the tower.  Whilst engaged in this work, he was also writing ‘Jude the Obscure’, whose hero is a stonemason.

There are excellent guides in the church.