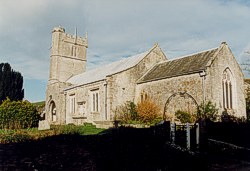 The little village of Portesham lies in a hollow in the Downs below the mighty Blackdown Hill.  A road runs past the church sharing the space with a twinkling stream that rushes headlong towards the sea.  This is an ancient building that, judging from the base of the tower, the eminent Dorset historian Hutchings says, is probably standing on a Saxon site.

Most of the nave, tower and chancel are 13c.  Interestingly, the chancel is out of alignment with the nave suggesting that it may have been deliberately ‘drooped’.  It was quite a common practice to symbolise Christ’s head drooping on the Cross.  Yet the north and south aisles of the nave, added in 16c, are curiously aligned with the chancel rather than the nave.  A most attractive wooden screen divides chancel from nave and above, both have excellent examples of wagon roofs.  Note especially the painted bosses on the chancel roof and the hagioscopes (or squints) in the chancel arch.

The pulpit is Jacobean, mounted on a modern base and the font is either 12 or 13c (church guide).  The south aisle houses an organ specifically built for the church by Hill Norman and Beard in 1968.  It replaced one built in Upwey and presented by a Lady Molyneaux in1895.  Above the west door to the tower, note, King George II’s Royal Arms, painted by Thomas Ironside in 1754.

Some Dorset guides make much of the tomb in the wall, where a man was buried half in and half out of the church.  Certainly there is a large tomb attached to the outside and inside of the south wall of the building and it belongs to William Weare, who was a committed Royalist during the English Civil War.  Unfortunately, being on the loosing side, he lost all his property after the war.  The story has it that he asked to be buried “neither in nor out of the church” and this was the ingenious solution.  However, the excellent church guide makes no mention of this and one is left wondering.

Perhaps the most important figure associated with the village is Admiral Sir Thomas Hardy of “Kiss me Hardy” fame, who was Nelson’s Flag Captain at the Battle of Trafalgar in 1805.  He was born at Kingston Russell in 1760, but spent his childhood here in the delightful house just to the west of the village crossroads.  He died after a very distinguished career, in 1839. The 80 ft tower on top of Blackdown Hill was erected as his formal memorial.