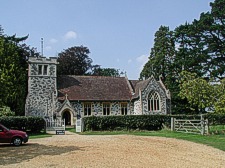 The church, which must surely be described as outstanding, is set at the head of a stunning wooded drive in a grassed clearing.  From the south, the approach to this is along a magnificent and very beautiful avenue of trees originally planted in 1846.

The building was the product of a co-operation between Mrs. Henrietta Bankes, the feisty chatelaine of nearby Kingston Lacy House, whose husband had left £5,000 "for the purpose of building and endowing a church at Kingston Lacy" and the eminent architect C. E. Ponting of Marlborough.  The foundation stone of the Arts and Crafts Gothic style structure was laid by Mrs Bankes on 15th February 1906 and the church was dedicated by the Bishop of Salisbury on 27th July 1907.  Mr Bankes also directed that £50 per year should be paid to the vicar of Wimborne (in whose parish it was) for a period of 25 years.

However, this was not the first church at Kingston Lacy.  Henry de Lacy was one of twenty-five barons charged with overseeing the observance of Magna Carta (1215).  In 1229 he was given the manor of Kingston Lacy.  A church, also dedicated to St Stephen, was constructed seven years later and survived until the 16c, but by 1573 had been allowed to decay to such an extent that it was beyond repair and abandoned.  Today nothing is left and its site is unknown.

Externally, the proportions of the present building are pleasing and the forty foot tower adds a gentle grandeur.  The walls, constructed from a mixture of Studland sandstone and Purbeck stone, have prompted some to suggest a tweed appearance.  Attached to the tower and above the left side of the porch, with its Arts and Crafts leaf surround, is a niche containing a statue by Palmer of St Stephen with his hand on the head of a small boy.  The boy was modelled in the likeness of Ralph, Mrs Bankes' son, who was to be the last squire of Kingston Lacy.

Inside, the building is delightfully simple and yet every detail has obviously received the closest attention and the overall effect is one of restrained excellence.   The alabaster font, supported by four angels and given by local farmers, is a particular example because when it arrived Mrs Bankes found a crack.  Refusing to accept less than perfection, it was returned to the makers, who replaced it with the one currently in use.