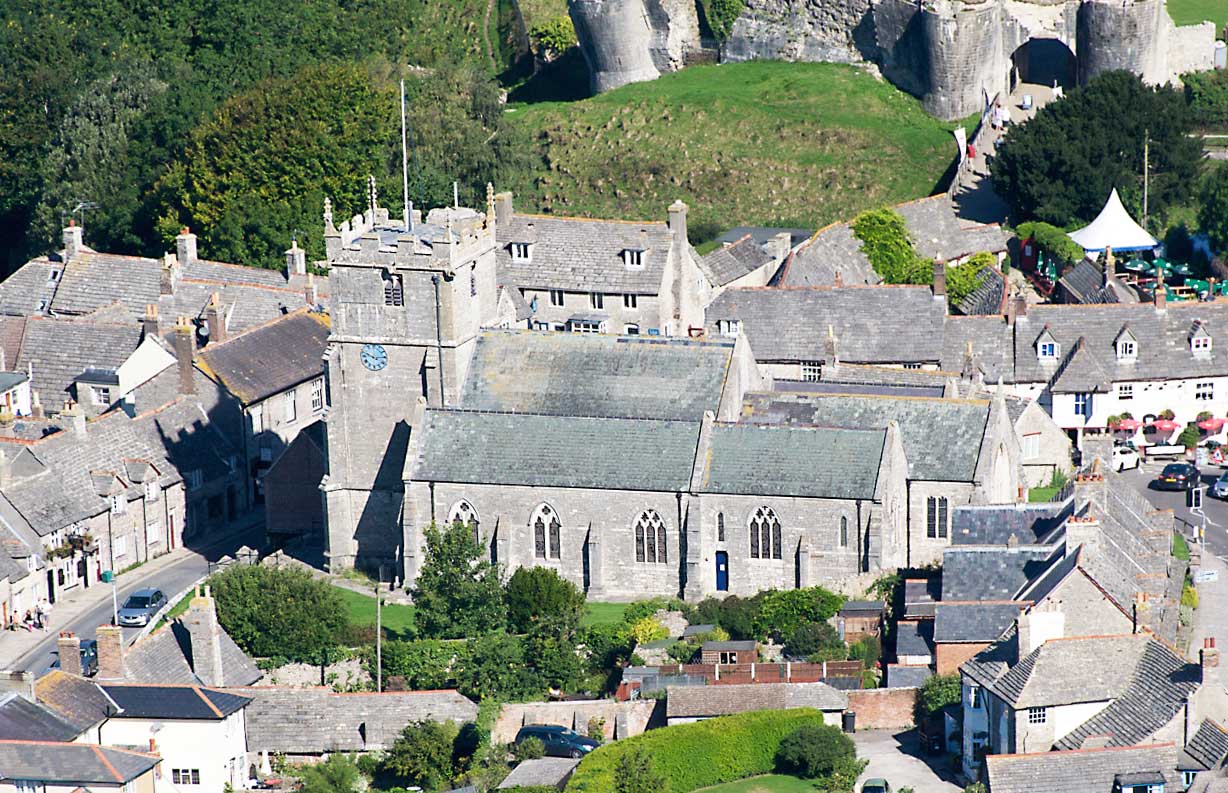 The village of Corfe Castle grew up as a result of the castle and because it remains one of the greatest tourist attractions in Dorset, it still prospers.  The stone-built village is very attractive in its own right and the church, set right in the middle, holds centre stage.

Around the year 978 AD legend has it that King Eadward (Edward) was hunting in the region and having become detached from the rest of his party became tired.  He sought refuge and some drink at a nearby hunting lodge.  He was met by 'Elfrida the Beautiful', who gave him a goblet of wine, but in an unguarded moment plunged a knife into his back, killing him.  His horse bolted and the body eventually fell off.  Elfrida ordered that it be found and it was dragged into a lowly cottage of a blind woman where rags were thrown over it.  During the night the room was filled with a silvery light and the woman, who had been watching over the corpse, miraculously had her sight restored.  In due course, the body was taken via Wareham to Shaftesbury for burial and Elfrida’s son, Ethelred, who would be known as ‘The Unready’, was proclaimed King.

The exact origins of the church are unknown, but the castle was started in the 11c and since the fortunes of both are bound up with each other, it is reasonable to assume that a building of some sort must have existed.  By the 12c the nave and most of the chancel had grown to more or less the size they are today.  In the 13c it was enlarged again with the additions of a south aisle to the nave and aisles on both sides of the chancel.  The tower was added in 15c.

The church, dedicated to the murdered king, suffered damage from time to time due to its proximity to the castle.  It was particularly badly abused by Cromwell’s men during the English Civil War when they mounted a gun on the tower and stabled their horses in the building, even using the font as a drinking trough.  Lead was stripped from the roof, cut and rolled-up to make bullets.  When the war was over, Parliament made a grant of £50 towards making good the damage.

However, the large and magnificent 15c tower has survived, as have its splendid gargoyles.  The rest of the present building is by T H Wyatt of 1859 – 60 in the early 13c French Gothic style.  The reredos is by G E Street (1824 – 81) and was added in 1876, during the time he was building his masterpiece at Kingston.  There are wonderful Purbeck marble columns topped with foliated capitals and the modern communion table set below the altar is most appealing.

There is an interesting black marble font with a 1947 cover by Martin Travers.  Outside, high up on top of the gable at the east end of the chancel stands the most attractive 1931statuette of St. Edward, by F H Newberry.