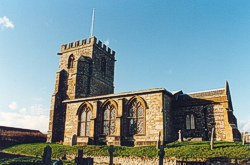 Toller Porcorum means Toller (taken from the name of the river, now called the Hooke) of the Pigs and there has been a community here since, at least, the Domesday Book of 1086.  The parish records extend back to 1235, although priests are thought to have served the village for hundreds of years before that.This attractive Church stands on raised ground in the middle of the village and is constructed of local stone.  The entrance is through a porch in the west 14c tower.  A Victorian spiral staircase gives access to the bell ringing chamber immediately above.  The asymmetrical chancel arch bears the damaged image of a man and a lady, fashionably dressed for 1473.  The chancel beyond is out of alignment with the nave and 'droops' to the south; this was probably quite deliberate to represent Christ's leaning head on the cross.  The font is in two parts.  The lower part with a ram's head is probably 12c while the top is 15c.The experts seem coy about dating this fascinating building and it may well be difficult because village churches tend to evolve as successive generations make their mark with alterations and 'improvements'.  However, it is certain that there were major works in 1891 when the south aisle was added and in 1894 when the galleries and box pews were removed.Several sources refer to the earliest of three vicarages in the village, which presently forms part of the outbuildings of Toller House,  having an underground passage between the vicarage and the Old Swan Inn across the road and another leading to the church.  It is very likely these were used for hiding contraband.