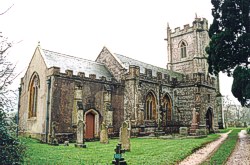 Sydling St. Nicholas is one of the prettiest villages in Dorset and was at one time owned by Sir Francis Walsingham, the minister to Queen Elizabeth I.  It has an interesting, essentially 15c church, worthy of the setting.

The chancel was remodelled in 1750 and the 15c tower has an 18c top.  Inside there is a splendid wagon roof and some of the box pews survive.  Near the 18c screen under the tower are three ancient chests.  The simple round font is 12c.  During the renewal of the north aisle floor, some time before 1988, evidence was found of a medieval bell-casting pit within the church.

Note, the simple modern wood carving of Christ.  The porch contains an upper room, complete with a fireplace.  Many churches were so equipped to accommodate visiting priests before the days of vicarages.  Later these rooms were used for civic purposes.  (See Cirencester church, which until relatively recently housed the council offices.)